skip to main | skip to sidebar

Before I start the "don't throw beer" rant,
I would just like to point out to Cubs Security that YOU KICKED OUT THE WRONG GUY!
The D-bag on the left is the one who threw the beer.
The D-bag on the right... well... you can throw him out too, but he didn't throw the beer. 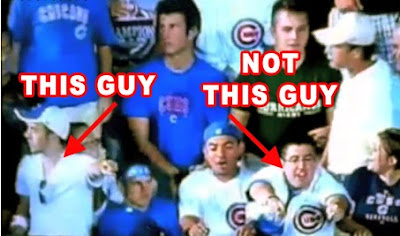 Look, I know you may have had one too many at the ballpark.
I understand you have a severe dislike of the Phillies... or Victorino... or the fact that the Cubs were getting shelled.

Way to drop the ball and wait until the very last minute to announce (on television - as an afterthought) that seventies night is on July 6th, which is totally inconsistent with every other time you've held a 70's night.

People need to plan ahead for these events, as your bleacher tickets often sell out for this event, and now since you haven't used the first home game in August like most people were expecting, we'll be unable to attend the actual event.

p.s. - plan to play a lot of seventies music on August 11th while you're giving out your Ryan Sandberg Bobbleheads, because we'll very likely dress up in 70's outfits on that day just to spite you.

Did the Cubs just blow a bunch of dough on round trip airfare from Iowa?
Posted by Ed_H at 10:18 PM No comments:

Thanks, Bobby! Come Back Soon!

For those who haven't heard yet...
Bobby Scales is goin back to Iowa.

This is a bad idea.
How are we supposed to have a Cinderella-Story-Ending if he's back in the minors?!?!

Oh... wait... I see.
Jim Hendry, you are a genius! Put him back in the minors for a month or two and then bring him back in August or September to bail us out of whatever mess the Cubs get into.

OK, carry on!
But if I don't see Mr. Scales return to Chicago in August, HEADS WILL ROLL!!!! (metaphorically)
Posted by Ed_H at 5:20 PM No comments:

"I pity the fool who don't get more runs!"
Now if he'd actually SAID that, the Cubs might have broken their losing streak. 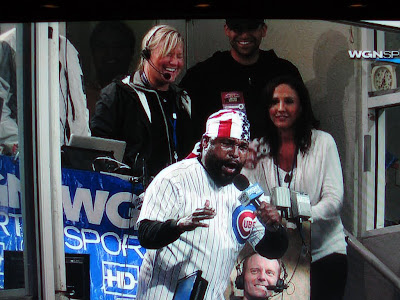 I'm probably going to catch hell from other Cub fans for even bringing this up, but...

Well, not exactly 40 years yet, but it seems like no one is even acknowledging this.
All I want to know is..
Has anyone... in all this time... considered...possibly... maybe...
letting a white cat roam across the field in front of Lou Piniella and then running behind whoever happens to be playing 3rd base (get well soon, Ramirez!) while he's on deck?

Everyone's been concentrating on that OTHER animal. Maybe it's time to shift gears.

OK, fine. You're not going to bother giving in to these "silly superstitions".
Then someone stop by the clubhouse and tell Lou to start giving these guys more batting practice or something! This is friggin ridiculous!!! Yes, more ridiculous than a freakin animal curse!


Ed also contributes various rantings to his own blog , VirtualCheeseBlogger
Posted by Ed_H at 12:39 PM No comments:

Posted by Spotmonkey at 10:56 PM No comments: